A wise man once said “f*ck it, I’m going fishing”! And he lived happily ever after…

I do believe in making wishes on occasions such as a birthday, when you blow off the candles or New Year’s when the clock hits midnight. I don’t think there’s magic in that. I truly believe there is the law of attraction – when you really want something and you whisper that to yourself, you’re kind of drawn to make those little steps to make those things happen.

Although I did make one wish at midnight this time, my New Year started without any dramatic promises or wishes this time. Just a few simple ideas what I want to accomplish this year. Now we are getting closer to that catfish or truth be told – fish in general! One of my ideas – to learn fishing! It’s much easier to think of a mouthwatering dish when looking at the fish counter at the store. It’s a different story, when you need to come up with something depending on the catch of the day. Which, my guess, may always come as a surprise. Once I did try fishing. Caught a snail… And that’s a different story…

This time we did our shopping at a new store and the lady at the fish counter was very friendly and communicative. She described some of the choices in such a mouthwatering manner, that we decided to go with the catfish filet.

I’m not much of a fan of breaded and fried food. Yet this time the choice was done based on a recommendation that the fish would be super moist and delicious. And it was!

Serve with your choice of sides. If you like a bit of acidity with your fish – drizzle with a touch of freshly squeezed lemon juice.

I love celery root puree. I’d choose it over potatoes any time. It’s lighter, flavorful and with different proportions of butter, cream or milk added, the taste may be slightly altered. I also added a pinch of dried herbs to it. I’d suggest to try it plain and then see if you want any additions. 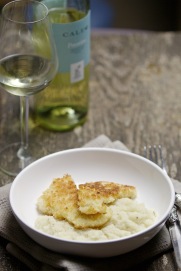 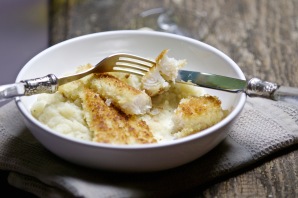 Copyright © 2020 Gintare Betaite and www.raspberry-flavor.com. All rights reserved. Unauthorized use and/or duplication of this material without express and written permission from this site’s author and/or owner is strictly prohibited.